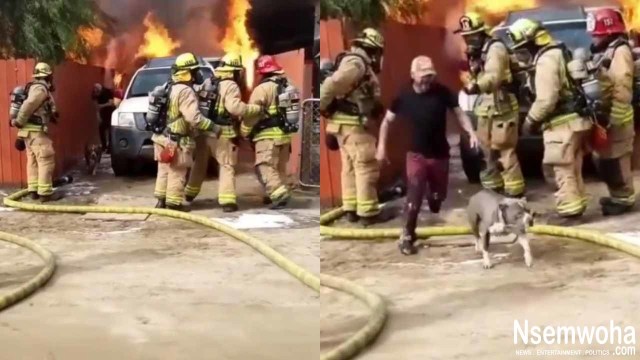 A man has shown that a dog is truly a man’s best friend and did put on his superhero suit to save his dog from a raging fire that had engulfed his home.

He got home to meet his house and vehicles on fire. Realizing his dog was still in the building, he runs past the firefighters who were unwilling to do the unthinkable for obvious safety concerns.

Without thinking twice, he dashed into the blazing fire, and for several seconds he hadn’t shown up.

Eventually, he came running out with the dog in the lead, thankfully unscathed, although the man might have sustained a minor burn.

99.5% Of Ghanaian Guys Are Broke And Stingy – Lady Reveals

Polyamorous Woman Shows Off Her 2 Husbands – Says We Live Together