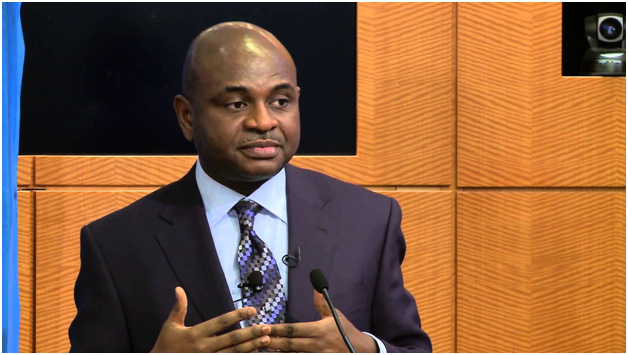 Prof. Kingsley Moghalu, a former Deputy Governor of the CBN on Friday in Abuja announced his decision to join the African Democratic Congress (ADC) to pursue his presidential ambition in 2023.

“I am pleased to announce to you today that I have joined the African Democratic Congress (ADC) which I feel ideologically aligned with. I am honoured to become a card-carrying member of the party.

“In doing so, I restate my public announcement on June 1, 2021, making myself available to lead our country as a competent, 21st century president and my intention to contest in the 2023 presidential election.

“I look forward to close collaboration with the party’s chairman, Chief Ralph Okey Nwosu, Alhaji Said Abdullahi, the ADC National Secretary and the National Executive Committee, and Chair of its Board of Trustees among others,’’ he told a news conference.

He added that his desire is to take Nigeria higher and make her the envy of other nations if he becomes the president.

Moghalu noted that since its founding, in 2005 to date, including in the 2019 general election in which the ADC presented the late Dr Obadiah Mailafia as its presidential candidate, the party had remained consistent.

He said the ADC had remained consistent in its commitment to the emergence of true democracy in Nigeria and to the role of belief, passion and idea in nation building.

According to him, Nigeria’s big political parties have failed Nigerians and voting for them again in 2023 will amount to a waste of votes.

Moghalu said the ADC remained a key player in the efforts to create a new and bigger platform through merger of several political parties to take over power in 2023 to begin the work of rebuilding the country.

He said he had been part of a group of individuals and political parties working towards the emergence of a “Third Force’’ in the country’s political space.

He added that Nigerians were tired of the failure of traditional politics and were waiting eagerly for the emergence of such platform.

“For the party’s growth and expansion in the months ahead, I ask all my political supporters, including those aspiring to be elected to gubernatorial positions and the national and state legislatures to join the ADC,’’ Moghalu said.

While welcoming Moghalu to the party, Nwosu said he had returned to where he truly belonged.

“He has found his way to where he truly belongs; our handshake as a party cuts across regions and sentiments and we will together build a better Nigeria for all.

“We welcome you proudly because you are a distinguished Nigerian. We need servants and dedicated leaders like you to lead this country’’ the ADC chairman said.

He added that the ADC had been working with other political parties and institutions to achieve its desire of enthroning a better Nigeria.

Moghalu, a lawyer and political economist was a presidential candidate of the Young Progressives Party (YPP) in 2019 presidential election.

Share With Friends:
Related Topics:ADCCBNFeaturedProf. Kingsley Moghalu
Up Next