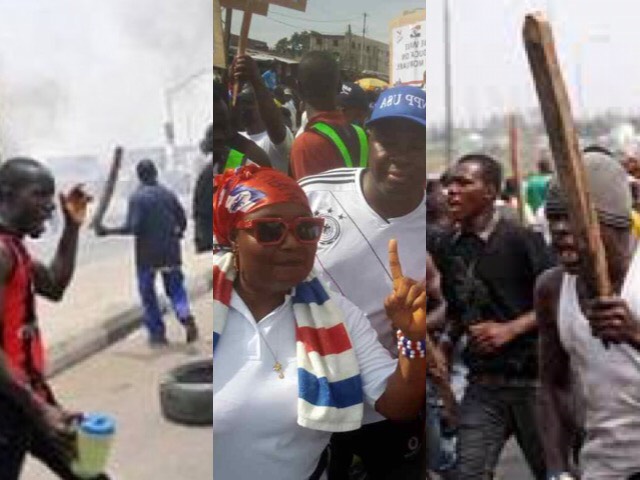 Earlier yesterday the 18th of December 2020, a group of NDC supporters embarked on a massive peaceful demonstration against the EC’s inconsistent election results.

The demo was however squashed by the police after they arrested 26 protestors.

After the demo, many NPP supporters went after John Mahama, the NDC leaders and supporters claiming that they love violence.

They also attacked them by saying they are supposed to go to court instead of demonstrating peacefully.

However, an old video from 2012 shows how NPP supports went out on the streets of Accra destroying cars, properties and attacking people in their way.

They were believed to be demonstrating against the 2012 presidential election results as declared by Dr. Kwadwo Afari Gyan.

They are seen in the video, vandalizing a vehicle of a by-passer, who had a poster of then-President John Dramani Mahama.

The protesters ignored pleads from the few policemen at the scene and continued attacking anyone they suspected to be an opponent meanwhile no one was arrested back then even though the demonstration was never a peaceful one.

This is how NPP supporters attacked and destroyed people’s property in 2012. Some of you were 10yrs old so you don’t know what happened. pic.twitter.com/9gQEyKAs52