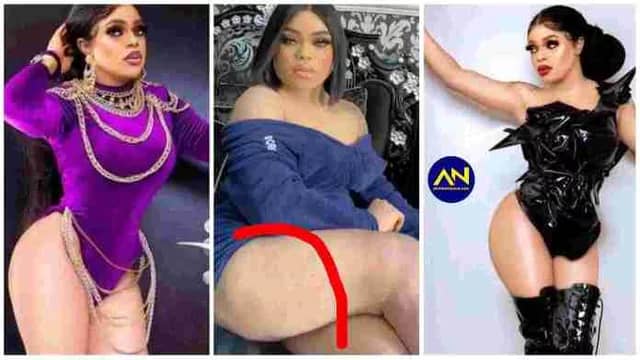 Popular Nigerian crossdresser, Idris Okuneye, popularly known as Bobrisky has sparked reactions on social media over a video which he shared.

In the video, black patches, red blisters and signs of a decaying body was apparently visible and fans didn’t hesitate to drag him.

Although the crossdresser used filter before sharing the photos, it couldn’t hide the defects on his skin.

This comes shortly he got into a heated beef with his former bestie, Tonto Dikeh who revealed that the crossdresser has a decaying, leaking body and currently smells so bad.

The trending controversy between actress Tonto Dikeh and her ex-bestie, crossdresser Bobrisky, could be taking an interesting twist as the former hints at releasing pictures to back her claims.

In her latest clap-back, the actress revealed that Bobrisky “smells bad” and has a leaky behind.

According to Tonto, she used to clean Bobrisky’s an*s with two packs of cotton wool every five hours because the controversial crossdresser would not listen to her advice and stop having an*l intimacy.

READ ALSO:  I Have Nothing To Lose Leaving Nigeria, I Have Two Houses In America – Peter Okoye

Tonto, who had revealed how the crossdresser was battling with a leaking butt took to her Instastory channel to ask her followers who wants to see the pictures.

Should Tonto go this far, the indignity of living with the shame may not go well with Bobrisky, who has reportedly undergone a series of surgeries on his butt just to have the feminine appearance he possesses.