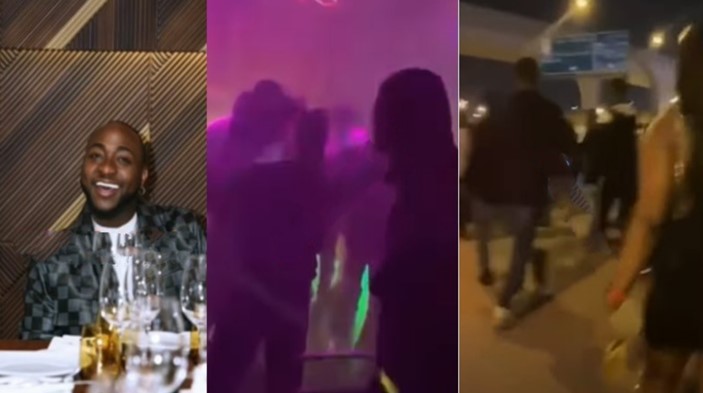 News gathered by Enewsnaija.com indicates that Nigerian rockstar, Davido and his crew members got into a fight with some Dubai big boys during his birthday party celebrations.

Davido turned 29-years-old few days ago and decided to throw a lavish and plush birthday party to commemorate the day with his fans, family and friends in Dubai.

However, the birthday celebrations which was supposed to be a a happy day turned into a bloody night as our sources say Davido’s men fought with some Dubai boys.

According to our reliable source who shared the video online, said it all began when the Fem hitmaker ordered some Dubai ‘big boys’ to stop filming him and they refused.

A fight is daid to have broke during the altercation between Davido’s crew and the Dubai big boys who invaded his privacy to film him.

In report filed by kanyidaily.com sighted online, many people were reportedly injured including one big boy from Davido’s crew who collapsed after he was stabbed with a broken bottle in the head before the police arrived to intervene.

It was gathered that the police later intervene in the fight, but some female clubbers accused Davido’s crew of seizing their phones.

A source said, “This happened at a club in Dubai. Some patrons got to the club and ordered a lot of drinks. Davido got in an ordered just one Azul and Don Julio.

“Then these guys bought more drinks and brought out their phones to record. The club’s bouncer approached them and asked them to stop recording saying Davido didn’t like it.

“An argument ensued a fight broke out between Davido’s crew and these patrons. One of the patrons collapsed after a bottle was planted on his head.

“The police intervened but some of the female club goers created a scene outside the club as they claimed Davido’s gathered men to seize their phones for recording the fight.”

Swipe to watch the full video below:

Share With Friends:
Related Topics:davidoDubai Big Boys
Up Next